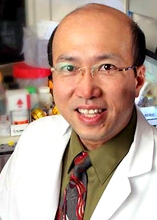 Dr. Rodney JY Ho is a distinguished professor of pharmaceutics (SOP), adjunct professor of bioengineering (SOM) and is an inaugural presidential entrepreneurial fellow of the University of Washington. He is also a member of Fred Hutchinson Cancer Research Center. He is the Founder and Executive Director of the Center for WE-REACH, a National Research Acceleration and Commercialization Hub. His research encompasses basic and translational sciences for improving the therapeutic efficacy and safety of viral and cancer drugs, diagnostic agents and vaccines. He is an expert in Systems Pharmacology and Translational Medicine. Ongoing programs aim to understand the interplay between drug target distribution and disease development in cancer, AIDS, and neurological disorders. Understanding of these interactions enable application of his discovery into novel device and nanomedicines selective for drug targets within cells and tissues in the body that could lead to a cure for AIDS. His research team is developing long-acting HIV drug combinations for global health and pediatric application. In addition to being an advocate of the Systems Approach to Drug Delivery and Targeting, he is an expert on protein therapeutics, lipid-drug and -protein interactions, liposomes, nanoparticles, pharmacokinetics, and the interplay between tissue targets and drug penetration As an editor of the Journal of Pharmaceutical Sciences, he has developed the Drug Delivery Clinical Trials and the PhRMA Pharmacokinetics Databases. He co-authored the book entitled,  “Biotechnology and Biopharmaceuticals” (2nd edition; Wiley and Sons).  He is also a scientific and board advisor to private and public organizations, including the NIH.  He received top honors including the Paul Dawson Biotechnology life-time achievement award, and the AAPS Biotechnology Research achievement, one of the highest AAPS’s recognition. He is an elected fellow of the American Association for the Advancement of Sciences and the American Association of Pharmaceutical Scientists (AAPS). He is also the recipient of the Volwiler Life-time Research Achievement Award from the American Association of the Colleges of Pharmacy.